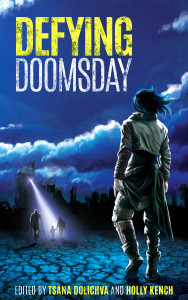 Teens form an all-girl band in the face of an impending comet.

A woman faces giant spiders to collect silk and protect her family.

New friends take their radio show on the road in search of plague survivors.

A man seeks love in a fading world.

How would you survive the apocalypse?

Defying Doomsday is an anthology of apocalypse fiction featuring disabled and chronically ill protagonists, proving it’s not always the “fittest” who survive – it’s the most tenacious, stubborn, enduring and innovative characters who have the best chance of adapting when everything is lost.

Defying Doomsday is now available for purchase in ebook and paperback formats. You can purchase a copy from the Twelfth Planet Press website and Amazon, and add it to Goodreads!

Get your copy at:

Defying Doomsday is an anthology of apocalypse-survival fiction with a focus on disabled characters, which will be edited by Tsana Dolichva and Holly Kench, and published by Twelfth Planet Press in mid 2016.

Apocalypse fiction rarely includes characters with disability, chronic illness and other impairments. When these characters do appear, they usually die early on, or are secondary characters undeveloped into anything more than a burden to the protagonist. Defying Doomsday will be an anthology showing that disabled characters have far more interesting stories to tell in post-apocalyptic/dystopian fiction.

The anthology will be varied, with characters experiencing all kinds of disability from physical impairments, chronic illnesses, mental illnesses and/or neurodiverse characters. There will also be a variety of stories, including those that are fun, sad, adventurous and horrific.

The stories in Defying Doomsday will look at periods of upheaval from new and interesting perspectives. The anthology will share narratives about characters with disability, characters with chronic illnesses and other impairments, surviving the apocalypse and contending with the collapse of life as they know it.

About the Defying Doomsday Editors:

Tsana Dolichva is a Ditmar Award-nominated book blogger and Holly Kench is the managing editor of Visibility Fiction. As editors and readers of science fiction who also live with disability and chronic illness, Tsana and Holly have often noticed the particular lack of disabled or chronically ill characters in apocalypse fiction. They are excited to share Defying Doomsday, an anthology showing that people with disability and chronic illness also have stories to tell, even when the world is ending.

Defying Doomsday was awarded a Ditmar Award for Best Collected Work in 2017 and was shortlisted for several other awards, which you can see in full here. Some of the stories contained within Defying Doomsday were also shortlisted for various awards, with the following stories taking home awards: “Did We Break the End of the World?” by Tansy Rayner Roberts won the Ditmar Award for Best Novella or Novelette; and “To Take into the Air my Quiet Breath” by Stephanie Gunn won the Tin Duck Award for Best Wa Short Written Work.

About the Defying Doomsday Campaign:

Following the success of Kaleidoscope, Twelfth Planet Press’s multi-award-nominated 2014 anthology, Defying Doomsday will be funded via a Pozible campaign, with the assistance of a Crowbar grant from Arts Tasmania. The campaign ran from April 1 2015 to May 1 2015, with a funding goal of $13,000 to cover production costs, reward items, and the funds to pay authors a professional market rate.

Defying Doomsday successfully funded on May 1, raising $13,750 to fund the anthology thanks to 271 wonderful backers!