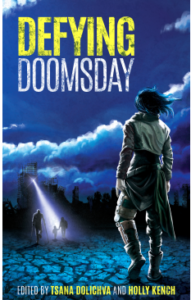 I feel incredibly honoured to have stories in both the Defying Doomsday anthology and its follow-up, Rebuilding Tomorrow. Both the contents and the titles of these anthologies have deep personal significance to me.

I grew up living with something that I considered a minor inconvenience rather than a disability. In retrospect though, it limited my life more than I realized, mostly because of the unhelpful reactions of a few other people. Back in early 2000, there was a new development though. I had a seemingly standard illness that led to a secondary infection, and finally ended up with an acquired chronic illness.

That was a personal doomsday that didn’t limit my life but destroy it. Things went rapidly downhill, and despite my best efforts to keep going, or possibly because doing too much made things worse, I eventually had to give up work. There was a long period that I describe as the black hole, where the tiniest action was a struggle, and I had to focus on making painstakingly slow improvements to my health.

In September 2007, I decided to defy my personal doomsday, and signed up to go to a two-hour class in creative writing each week. I chose creative writing for two reasons. The first was that I’d always loved reading books and dreaming about fantasy worlds. The second was that I had to spend most of the day lying in bed, and I could write lying down. The big problem was that I’d have to travel to the class, and it started at 10:00 in the morning, while my most functional time of day was a couple of hours in the afternoon.

I actually signed up to another class as well. That was in a completely different subject, but had the advantage of being closer to home and in the afternoon. I thought that would make it much easier for me to attend the class, and it did. My background illness was varying from day to day at that point though, so it still wasn’t possible for me to get to the class every week. When the teacher brought in a new rule about people missing classes, I dropped out and focused on my creative writing class.

I didn’t manage to get to the creative writing class every week either, but that teacher didn’t see it as a problem. I wrote some short stories that did well in competitions, and then moved on to trying to write something longer. In late 2009, I started writing a book with a main character who stomped around in my head as she told me her story. After the long period where I hadn’t been able to get out of the house, I was writing about a character who lived in a future where most people portalled freely to hundreds of colony worlds scattered across space. She was among the unlucky one in a thousand though, trapped on Earth by a faulty immune system that gave her a fatal allergic reaction to other worlds. She was angry at the people who made her situation harder than it needed to be, and some of that anger was mine.

That was the start of a trilogy aimed at bringing a disability themed story to a wide audience. I wanted people to enjoy the adventure, while hopefully making them identify with the character and experience her problems with her. The trilogy featured a disability that doesn’t exist today, partly because I was transferring my own experiences into a science fiction setting, and partly because I wanted to make the point that changes in technology and the expectations of society can create or remove disabilities.

Widespread availability of glasses helped people with vision problems. Dyslexia wasn’t a problem until society changed to expect everyone to be able to read and write. As I write this, the world is in the middle of a pandemic. Some people who have had Covid-19 are hitting a problem called Long Covid, with symptoms depressingly familiar to me.

So, I wrote my trilogy lying in bed. After the third book was published, I was working on more books that didn’t have a disability theme, but included a diverse range of characters, some of which would have specific current disabilities. At that point, I heard about the Defying Doomsday anthology.

I knew at once that Defying Doomsday would be something hugely significant in science fiction. These stories would be showing a wide variety of disabled and chronically ill protagonists caught in apocalyptic situations, and using their past experiences to face global catastrophe. Some readers living with those issues would see themselves reflected in a story for the first time, but the anthology also had a vitally important message for people with no personal experience of disabilities.

Defying Doomsday showed that complex reality wonderfully well, with a whole range of different protagonists battling the apocalypse, and now I’m looking forward to the follow-up anthology, Rebuilding Tomorrow. Again, this is a title that has personal significance to me. I went through my personal doomsday twenty years ago. I still have to spend a lot of time lying in bed, but I’ve gradually rebuilt my life and world around being an author.

Janet Edwards lives in England. As a child, she read everything she could get her hands on, including a huge amount of science fiction and fantasy. She studied Maths at Oxford, and went on to suffer years of writing unbearably complicated technical documents before deciding to write something that was fun for a change. She has a husband, a son, a lot of books, and an aversion to housework.

Find out more about her writing at:-