Today we have an interview with Fran Wilde on the blog. Fran has written a lot of stories and novels featuring disabled characters. One of these stories, “Rhizome, By Starlight” will appear in Rebuilding Tomorrow, which you can help make happen by backing us on Kickstarter now.

Below, we have Tsana’s questions in bold and Fran’s answers in plain text.

So, can you tell me a little bit about the process of writing “Rhizome, by Starlight”, from the first idea to the complete story. 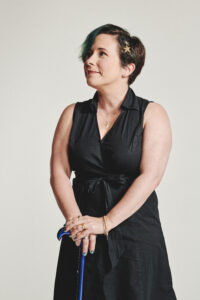 I was drawn to the idea of not just surviving but thriving post-event and how that might look for someone who had an inherited disability. My main character is part of a group that has been left behind because of their disabilities and asked to guard a seed warehouse. She’s descended from the original people who were left behind.

The process that I went through was an exploratory draft, which I usually do, which makes absolutely no sense to anyone but me. I often bring it past my critique group and ask if it makes sense – sometimes it does, other times, it doesn’t. And then I go back and write some more. This time I also turned to a friend of mine who is a biologist and talked with her about how plant propagation and DNA and gene splicing can impact inheritable traits. Because one of the things that is really playing out in a lot of main narratives is that in the future when everything is great there will be no more disability. And that smacks of eugenics to me, and I wanted to explore the ramifications of someone reaching for a miracle cure and also the consequences of that seeming to fail but not actually failing. And the idea that there is potentially more options out there the more diverse our universe is.

I tend towards science and engineering when writing but I like to play with what-ifs and possibilities and I definitely let that scroll out a little bit here into the far flung future. So there’s been a flood, there’s been another flood, the mountaintops are instead skyscrapers and the big scientific research ship is, of course, all the survivors who were “supposed” to survive. The main character has grown up wild in, you know, a destroyed formerly first world country where her family was not deemed survivable. And she survived anyway. I wanted to bring that out in a story that was layered with hope and nuance and different possibilities than what the main narratives sometimes tend to remember are possibilities.

If a reader only takes one thing away from your story, what do you hope it’ll be?

That genetics is really cool and really weird. And that the one size fits all approach to genetics is neither good nor healthy.

You’ve written many other stories featuring marginalised characters, have you ever received any pushback from editors or readers?

For my very first stories, and especially my novels, there have always been disabled characters: characters who are experiencing life a different way from the mainstream. That’s just a reflection of the world as I see it. The majority of my disabled characters, in particular, have lives and goals beyond their disability. They are impacted by their disability and it defines them, but it doesn’t define their role in the story. My experience with Updraft was that not a lot of people realised there were five disabled characters in the story because the characters were so busy having lives and adventures and making and doing things. Which is really, I think, important to show in fiction. So, I tend to have characters that engage in one way or another with different experiences like that and the pushback hasn’t necessarily come from my editors.

At some points, especially with “Clearly Lettered in a Mostly Steady Hand”, people were surprised at the anger that was sort of layered through the story. And I think in part they didn’t expect that from me because I don’t tend to write with that tone. And it’s sad and funny that, because I don’t write with that tone, people assume that it’s not there. There were some pretty personal experiences in “Clearly Lettered” that brought the anger out with it. And my main character in that story is really, really, truly pissed off. This pushback was countered in a really important way by the letters that I got, especially for “Clearly Lettered”, but also for “Disconnect” and “A Catalog of Storms” even. In each, the emotion and the feelings that the main characters experienced as they were encountering other people with opinions about who they should be and what they should do resonated with my readers. This was true especially for readers with invisible disabilities, people who’d encountered a lot of medical situations in their childhood, or who’d been in a situation where their experience of their community was transformed by their diagnosis. And those reactions and letters meant a lot to me.

Can you recommend other fiction, long or short that you think captures the experience of disability and/or chronic illness well?

Absolutely. Marieke Nijkamp: pretty much everything that Marieke writes, their fiction is extraordinary. And The Oracle Code, which is the graphic novel, Barbara Gordon YA retelling is astounding and I adore it. I really like Corinne Duyvis’s novels and the way she engages with characters across a range of different marginalisations and experiences navigating society. Different aspects of disability in particular.

Frances Hardinge did a really neat thing with Deeplight, where she’s writing characters who have, during the course of their careers, gone deaf from diving deep. She did the research, she did the work, that involved talking with the deaf organisations in Britain and having sensitivity readers help her figure out where to position the discussions around her characters and how to make her prose stronger.

Kathleen Howard also does an amazing job writing diverse characters and marginalised characters especially mental health and mental illness. I really like the way Aliette de Bodard engages with trauma and PTSD in her Tea Master and the Detective especially. It’s a Sherlock Holmesian retelling but there’s something deeply evocative of the layered experiences of being eminently capable at your job but still doubted because of who you are.

Would you like to tell us about any other new or upcoming releases that you have?

Yes! My next novel is another middle grade. It’s called the Ship of Stolen Words and it is about a fifth-grader named Sam whose favourite word is “sorry.” It gets him out of trouble all the time… until it’s stolen by a goblin named Tolver who needs it to fuel his machines on his side of the universe. There’s a whole bunch of shenanigans, things happen and there’s a Little Free Library portal to another universe involved. That’s a lot of fun but the story’s also about language and what happens when you can’t say what you need to say. How to figure out how to fix things on both sides of the universe — both characters have roles to play in this. I had a really great time writing it.

I’m also finishing the last novel in the Gemworld series which I’m really excited about.

I’m working on a bigger project which is about invisible disability, specifically EDS and scoliosis and astronomy and gymnastics and small towns. And umbrella factories, but that’ll become more apparent soon I hope.

And I have a short story called “Rhizome, by Starlight” which is coming out in your publication which I’m excited about.

Fran directs the Genre Fiction MFA concentration at Western Colorado University and writes nonfiction for publications including The Washington Post, The New York Times, and Tor.com. You can find her on Twitter, Facebook, and at franwilde.net.

Links to Fan’s books:
The Ship of Stolen Words
Riverland
Updraft  – Cloudbound – Horizon
The Fire Opal Mechanism
The Jewel and Her Lapidary