Today on the blog we have an interview with Stephanie Gunn. Stephanie has stories in both Defying Doomsday and Rebuilding Tomorrow, which she discusses below. She also wrote the novella Icefall, which will be going out to everyone who backs our Rebuilding Tomorrow Kickstarter, to celebrating passing 250 backers.

Can you tell me a bit about the process of writing “To Take Into the Air My Quiet Breath”, for Defying Doomsday and “The Rest Is” for Rebuilding Tomorrow?

Writing stories for Defying Doomsday and Rebuilding Tomorrow has been an eye-opening experience for me. I grew up reading a lot of dystopian and post-apocalyptic fiction, and had grown very used to the face that in most of these stories only the strong and/or smart survived. And, most of the time, I never questioned it.

As a young adult I developed a chronic illness, which derailed my life and destroyed my career plans. Almost overnight I went from being someone who had the potential to be someone society considered useful to someone who a lot of people would like to forget about. At around the same time I began to learn more about the discourse about the many issues surrounding speculative fiction, including the lack of representation of characters with disability.

I went back and read some of the stories I’d grown up on with different eyes, and I saw what I’d been blind to. The disabled and ill—if they survived the initial apocalypse—were not treated well. They could be left behind, sacrificed to the zombie hoard or other danger, making a heroic sacrifice so the able-bodied could win. Sometimes they were magically cured. Occasionally there would be an inclusion of a character who had a disability (for example, had a leg amputated), but any issues related to that were glossed over, their character treated essentially the same as any other. More often they just weren’t there at all, a huge chunk of society just forgotten about.

To write “To Take Into the Air My Quiet Breath” for Defying Doomsday, I wanted to make sure that my characters wouldn’t be forgotten and couldn’t be left behind. From my background in genetics, I knew that some gene mutations could both cause disease and be protective against infection. The classic example is sickle cell disease. The gene for sickle cell is recessive, so you need to inherit a mutated gene from both parents in order to develop the disease. Interestingly, inheriting only one copy is protective against malaria infection. In “To Take Into the Air My Quiet Breath”, cystic fibrosis is protective against the influenza pandemic that burns through the world, and the story follows a trio of sisters, twins who have CF and their older sister who is a carrier, as they journey through a devastated world. 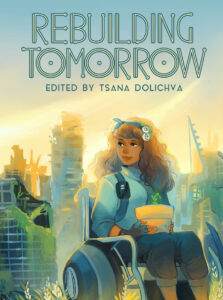 My initial drafts of the story, quite honestly, didn’t contain much hope. Insightful beta readers and editing helped find some hope for the sisters, thankfully. When it came time to thinking about a story idea for Rebuilding Tomorrow, I thought I had one nailed. If I could find hope for characters with a genetic disease that’s going to be lethal without modern medicine, you can find it for anyone, right? And so I developed an idea with a cast of diverse characters, and included many with disabilities and chronic illnesses, giving them a world where they could, in theory become what they wanted. I thought I’d given them hope, too.

And this is where writing becomes a mirror. I was blind to a huge issue with the story, which was gently pointed out to me. Without consciously intending to, I’d replicated those same old tropes from the books I’d grown up with – the broken people who get left behind so the able-bodied can have their journey and adventure. It made me realise how much internalised ableism I still hold onto in regards to my own self, despite living almost two decades with chronic illness.

Going back to the drawing board, I had to really think about the mission of Rebuilding Tomorrow. The apocalypse has happened, disabled and chronically ill people have survived. What kind of world would they want? If you could rebuild our world from scratch, how would you create it? What do you hold onto? “The Rest Is” gives an idea of what a better world could become—one where people don’t have to be cured or fixed, where they are not a burden, but where accomodations are made for everyone who needs them. Where every life is valued for what people can give, and not defined by their limits.

If a reader only takes one thing away from your story in Rebuilding Tomorrow, what do you hope it will be?

We need to do better. A lot of the things about this rebuilt world are things that are possible now. We need to accommodate people instead of shutting them away, value what they can still give and contribute. Everyone matters.

Have you ever received any pushback from editors or readers when you’ve included marginalised characters in your stories?

Thankfully, I’ve been extraordinarily lucky with the editors I’ve worked with in that no one has ever questioned it, which says an enormous amount about the quality of those editors and what kind of work they want to put out into the world. As far as I know, it hasn’t been an issue with readers either, and I hope that continues.

Can you recommend some other fiction — long or short — that you think captures the experience of disability and/or chronic illness well?

The pretty terrible part about this question is how hard I had to think to find these examples, which says a lot about how important both Defying Doomsday and Rebuilding Tomorrow are.

You can’t talk about disability in science fiction without mentioning Lois McMaster Bujold’s Vorkosigan Saga books. Miles is disabled from birth, and just as in real life, his disability affects everything in his life, including his personality. He lives with pain, and learns over the course of books to adapt and use technology to manage some aspects of his disability, but he never really escapes from it. He’s never treated as an inspiration, either, but has to earn his accolades the same as anyone else. The books are also tremendous fun, and a series that I’ve reread many times.

Corinne Duyvis’ On the Edge of Gone features an autistic character surviving a comet strike on the Earth (and it is notable that Duyvis is autistic herself). This book features a diverse cast, and the fact that Denise, the main character, is autistic, is treated as just another facet of her, something that affects her life but doesn’t define it. It’s also just beautifully written and compelling. Duyvis’ story in Defying Doomsday is also great, and takes place in the same world.

Mishell Baker’s Borderline is another brilliant example. Millie (like Baker herself) has borderline personality disorder, and has attempted suicide, which resulted in her becoming a double amputee (Baker isn’t an amputee, but it’s obvious that she extensively researched this aspect). This book, and its two sequels, feature a diverse cast in a contemporary fantasy world, and Millie’s mental illness and physical injuries shape everything about her, even as (as with Duyvis’ Denise) they do not define her.

Finally, would you like to tell us about any other new or upcoming releases you have?

There’s nothing officially coming out, but I’m working on several projects. I’m currently drafting a sequel to my novella Icefall, another novella tentatively titled Spindrift, which is set several decades after the events of Icefall. There will be a third novella as well, though that exists in a more nebulous outline right now. I’m also working on at least one prequel novella, which takes place during the exodus from Earth. I’m also trying to teach myself to properly outline a novel, so I’m ripping apart an old draft of a contemporary fantasy novel and rebuilding it from the ground up. I’m hoping that it will result in something publishable by the end, but if not, it’s a good learning process!

To find out more about Stephanie Gunn, visit her website. You can also find her on Twitter.